Elf on the Shelf – Friend or Foe

***I originally posted this in 2011 on Peanut Butter on the Keyboard  (peanutbutteronthekeyboard.com/2012/12/11/guest-mom-tracy-brogan-the-elf-on-the-shelf-friend-or-foe) but it’s that time of year again and it seems like the Elf is back for many of you. Good luck with that…*** 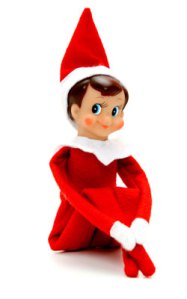 When December rolls around, most of us start thinking about the holidays. That most wonderful time of the year when we trim the tree and light the log, wrap the gifts and make that nog. We want to get our holly jolly on, and have a cup of cheer. (At our house, cheer tastes very much like Bailey’s on the rocks.)

Yet for many of us, December is also the season of house guests. Some are welcomed with glee and arms flung wide. Others are met with slightly less enthusiasm. The nit-picky mother-in-law perhaps, or the ubiquitous crazy uncle. You know the one I’m talking about – the uncle who never shuts the door all the way when he uses the bathroom. And he doesn’t refer it as “the bathroom,” either. He just calls it “The Toilet.”

But at this most glorious time of year, when beloved (and less-beloved) relatives descend upon us, many homes must also contend with that most insidious of houseguests. The one who requires daily attention. The one who can scarcely move from place to place without your assistance.

I’m talking about… the Elf on the Shelf.

I have a love/hate relationship with this guy.

Well, not hate, exactly. That’s a strong word. I hate prejudice, and world hunger, and shopping for a swim suit. When it comes to the Elf on the Shelf, let’s just say I have a love/don’t-love relationship.

To explain why, let me begin with a little history.

This fuzzy, flannel peeping Tom hit the scenes in 2005 as part of a picture book set. THE ELF ON THE SHELF: A CHRISTMAS TRADITION was written by the mother/daughter team of Carol Aebersold and Chanda Bell. After being refused by several publishers, they decided to self-publish. Yay! Good for them. Mark that in the “love” column. Since then, they have sold over 2.5 million copies! More love for them on that! I’m always happy for a writer who hits it big – even if it’s not me, or someone I know well enough to borrow a million dollars from.

Now, the premise of this story is simple. Each December, the Elf shows up to spy on your children and then report back to Santa on whether they have been “naughty” or “nice.” Mark that in the “love” column, as well. I appreciate any type of big-brother-esque manipulation to ensure obedient behavior from our offspring. After all, a mom’s gotta do what a mom’s gotta do to keep the kids in line. How else is she supposed to write, cook, shower, or make a martini? So I have no issue with telling my kids they’re being observed by a magical, omniscient being who holds the key to how many presents they’ll get on Christmas.

The disadvantage of this Elf is that, as the story goes, each night he flies back to the North Pole to submit his report, then he returns to your house the next morning and parks his little, red-felt backside in a brand new spot. That means I have to remember to move him. Every single night.

And I have to find approximately twenty-four unique spots since he shows up on December 1st and doesn’t vanish until Christmas Eve. Definitely a mark in the NOT-love column. I’ve lost track of how many times I’ve gotten out of bed at 2:00 a.m. after realizing I’d forgotten to move the darn Elf.

Thinking myself oh-so-clever, I even tried putting a reminder my cell phone calendar – only to have my husband change our settings to the icloud so my note, “Move the Elf,” showed up on my kids’ ipods. Sometimes sharing isn’t all it’s cracked up to be.

A few years ago, my oldest caught on to the whole Elf scheme. You’d think this would have made things easier since she could help me trick my littler one. But, oh, no. Instead, Thing One repeatedly incited Thing Two into a search and rescue frenzy with the intensity typically reserved for victims of a burning building or a sinking ship. This, of course, led to the great “Why is the Elf hiding in Mommy’s bra drawer?” debacle of 2010.

Truth is, the Elf is a pain.

Because he is also magical. Kids don’t see him as a spy. They see him as a visiting loved one. A friend to confide in. A link directly to Santa and all their Christmas wishes. And like Santa, he represents an opportunity to step outside the constraints of reality and visit a place of happy dreams. As a writer, especially a romance writer, I’m all about the place of happy dreams. I would live there all the time if I could. So, if I can create that world for my kids, even for a few, wonderful weeks, I’ll do it. It’s the same reason we do Easter baskets, and have leprechauns visit around St. Patrick’s Day. My mother did all that silly stuff for me and it made my childhood lovely. If I can give that sense of wonder and fantasy to my own kids, it’s worth a little extra effort.

Perhaps the ultimate irony is that as I was working on this post, my littlest came into my office. She sat down in the chair and said, “I know you’re busy but I need to ask you something.”

A look at her face told me it was something serious.

Really? She’s asking me this just as I’m typing words like “magical” and “fantasy?”

But she’s eleven and her street smart friends have been telling stories. And her older sister has been dropping hints like atom bombs. So, just now, I told my baby girl the truth about Santa. All of it. I could see the wheels and cogs in her mind spinning.

“What about the Elf? Is that you, too? You can tell me the truth. I can take it.”

So I did tell her.

And she could take it.

She listened to the news stoically, with maturity, while I puddled up like a little girl.

Now, it looks like I don’t have to move The Elf on the Shelf anymore. But the fact is, I think I’ll miss him more than my kids will.

2 thoughts on “Elf on the Shelf – Friend or Foe”

Tracy Brogan is giving away a digital copy of MY KIND OF YOU and a $10 Amazon gift card.